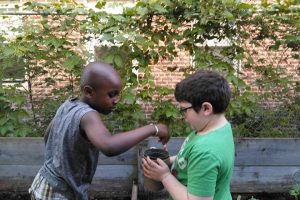 Every group, from pre-school through sixth grade, has a raised bed garden in Jubilee’s backyard. Volunteer gardeners work with students to prepare the soil, plant seeds, water and weed their gardens and harvest the vegetables. Students learn about plants, cycles of growth, and ecosystems along with the joys of gardening.