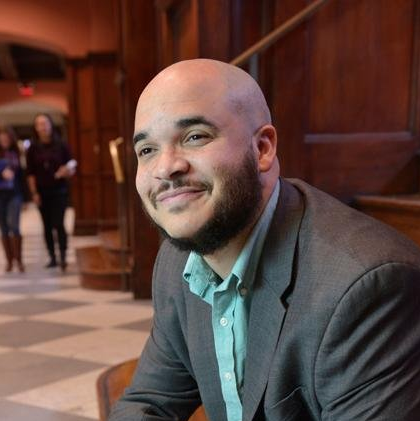 The Rev. Charles L. Howard,PhD is the University Chaplain at the University of Pennsylvania, his alma mater. Prior to his return to Penn, he served as a chaplain in hospice and hospital and as a street outreach worker to homeless in Philadelphia. His writing has been featured in such publications as Black Arts Quarterly, Black Theology, Chronicle of Higher Education, The Huffington Post, and Slate. He is the editor of The Souls of Poor Folk, a 2007 text which explored new ways of considering homelessness and poverty. Chaz has taught in the College of Arts and Sciences and in the Graduate School of Education at Penn, as well as at The Lutheran Theological Seminary of Philadelphia.

Mark Palacio has been teaching children and playing the double bass in Philadelphia for over two decades. His adventures in K thru 12 teaching have included positions at Greenfield Elementary and Germantown Friends School. He is now a fifth/sixth grade teacher at the Miquon School. He is a co-founder of the Germantown Poetry Festival and co-host of umüvme (you-move-me), a poetry show on Gtown Radio. He is a self-taught musician who has studied with many of Philadelphia’s jazz luminaries–Trudy Pitts, Larry McKenna, James “Hicks” Glenn, and Tyrone Brown, to name a few. As sideman or bandleader, Mark is a sought-after musician playing regularly in and around town with his partner Yolanda Wisher, Philadelphia Poet Laureate Emerita.

Yolanda Wisher, a Philadelphia-based poet, singer, educator and curator, is the author of Monk Eats an Afro and the co-editor of Peace is a Haiku Song. She taught high school English at Germantown Friends School for a decade, served as Director of Art Education for Philadelphia Mural Arts, and founded and directed the Germantown Poetry and Outbound Poetry Festivals. She was the Poet Laureate for Philadelphia in 2016. She performs a unique blend of poetry and song with her band The Afroeaters and has led workshops and curated events in partnership with the Philadelphia Museum of Art, the Free Library of Philadelphia, and the U.S. Department of Arts & Culture.

Jos Duncan is Program Director at WURD, Founder of Love Now Media, filmmaker and traditional storyteller. She created GriotWorks, which works with filmmakers and storytellers to reclaim traditional cultural practices as a form of resistance and community building. Jos challenges racism by elevating heritage and strengthening cultural identities, and by creating platforms for African American stories, traditions, and culture to be learned and celebrated.

Valerie Gay is the Executive Director of Art Sanctuary, which focuses on the community building power of Black art. She is an accomplished singer of opera, musical theater and solo recitals. Valerie was formerly the assistant dean of Institutional Advancement for the College of Education at Temple University, Vice Chair of the Board of Directors of Greater Philadelphia Cultural Alliance and member of the Education Committee for the Mann Center for the Performing Arts.

Julien Terrell is the current Executive Director for the Philadelphia Student Union. He was born and raised in Harlem where he first developed his passion for social justice. He began organizing on issues of gentrification and environmental justice in Buffalo and NYC, connecting this work to the preservation of cultural and community spaces. He has a deep commitment to fostering creative leadership among young people of color through community and cultural organizing, and the study of resistance within black and brown communities throughout history.

Angela McIver is a member of the Philadelphia School Board, and the founder of Trapezium Math, an afterschool math program. Angela is a former middle school math teacher with 25 years of experience working with students in urban settings. Her work with low-income students as Director of the Upward Bound Math/Science program prompted her to pursue a Ph.D. at the University of Pennsylvania, where she studied urban middle school students’ numerical reasoning. She grew up in a family of activists.

Leila Falcon has been an art teacher for the School District of Philadelphia for eleven years. She received her BA in Art Education at Tyler School of Art, and her MA at Moore College of Art. In 2015 she curated an art show of her students’ work in a venue in the West Philadelphia neighborhood of their school. The students showed art work about social justice issues that impacted them in their own community. Leila has worked with her students on four murals.

Louis Massiah is a documentary filmmaker and the founder/director of Scribe Video Center in Philadelphia. His innovative approach to documentary filmmaking and community media have earned him numerous honors, including a MacArthur Fellowship (1996-2001), two Rockefeller/Tribeca fellowships and a Pew Fellowship in the Arts. His award-winning documentaries, The Bombing of Osage Avenue (1986), W.E.B. Du Bois – A Biography in Four Voices (1996), two films for the Eyes on the Prize II series (1987), and A is for Anarchist, B is for Brown (2002), have been broadcast on PBS and screened at festivals and museums throughout the US, Europe, and Africa.

John L. Jackson, Jr., is the Walter H. Annenberg Dean of the Annenberg School for Communication and Richard Perry University Professor at the University of Pennsylvania. John studies race, class and difference in contemporary urban America, and his work also critically explores how film and other non-traditional or multi-modal formats can be most effectively utilized in scholarly research projects. He is one of the founding members of CAMRA, the University of Pennsylvania-based initiative organized around creating visual and performative research projects and producing rigorous criteria for assessing them.

Amy Hillier is the recipient of the 2016 Excellence in Teaching Award, standing faculty, University of Pennsylvania School of Social Policy and Practice . She teaches courses on mapping for city planning, social work and urban studies. Her research has focused on geographic disparities in health and housing, particularly across racial and economic groups, including issues such as mortgage redlining, access to healthful food, park use and exposure to outdoor advertising. She is the co-director of The Ward: Race and Class in Du Bois’ Seventh Ward, a teaching, research and outreach project focused on WEB Du Bois’ classic 1899 book, The Philadelphia Negro. Through that project, Dr. Hillier visits Philadelphia public schools to engage high school students in discussions about historical and contemporary issues relating to race and racism.

Nyle Fort is a minister, organizer, and scholar based in Newark, NJ. He received a BA in English from Morehouse College and a Masters of Divinity from Princeton Theological Seminary. Nyle has worked in the fields of education, criminal justice, and youth development for nearly a decade in various capacities including, but not limited to: Youth Pastor of First Baptist Church of Lincoln Gardens, American Friends field worker at the Union County Juvenile Detention Center, and International Fellow at the St. Andrew Centre for Human Development in Southern India.  An activist committed to global transformative justice, Nyle brings his national experience and international lens to his local work. Several years ago, he travelled to Ferguson, Missouri to help build the Movement for Black Lives.