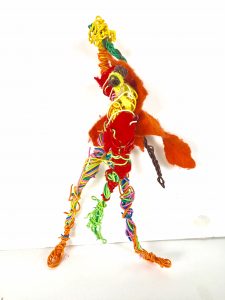 Jubilee Alumni, Aziz Kane, has been creating sculptures with wire for over a year. Aziz began creating wire figures in 2016. As a way to keep his hands busy in class, Aziz began twisting colored wire into figures based on Anime cartoon characters. Since then, Aziz has built a collection of expressive figurines – fashioned with wire, masking tape and pipe cleaners.

Aziz’s work will be on display at State Representative James Roebuck’s office at 4712 Baltimore Avenue . Stop by to see his window exhibition until winter 2017.

The Deep Past of Haiti
In 2014, inspired by the Declaration of Principles written by W.E.B. Du Bois and the Niagara...
Gardening at Jubilee
Every group, from pre-school through sixth grade, has a raised bed garden in Jubilee’s backyard....
Jubilee Book Club
Mr. Mike is leading a monthly book club on W.E.B. DuBois' Black Reconstruction in America.  He...