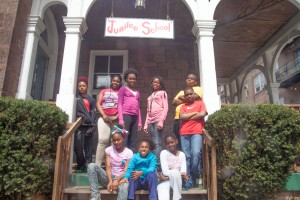 By Students in Fifth and Sixth Grades, Jubilee School

1. We, the children demand a great, well focused, equal education for children all around the world. We believe in children. We believe that children can change the future and transform people’s lives. We propose that education should take us to a new level in life, so that we can make history, be leaders and make our ancestors proud.

2. We, the young, Black representatives, protest about how history is taught. We believe that children should know all of their history. They should know what their ancestors have been through and how they were powerful, fought back and got their freedom. We recommend that children should not only learn about one side of history. We should learn the heart of history. We need to know the truth about what came before so we can know who we really are and what we were brought on earth to do.

3. We the children stand by what we are sure of. We have many generations after us and we don’t want gun violence in our world. We demand strict gun laws everywhere. We refuse to let innocent people get put in graveyards by guns. We recommend that assault weapons should only be used   by the military. We demand that game companies stop making violent video games because they brainwash children’s minds. We want a gun-free world.

4.  We demand that the government stop building more jails and build more schools. A large percentage of people in jail are in there because of drugs. We protest against drug users going to jail. If people are doing drugs, they’re hurting themselves. We’re demanding that drug addicts not be sent to jail, but be sent to rehabilitation centers so they can put their lives back on track. The more rehabilitation centers, the less prisons there will need to be, and the more money there will be for schools. Think about the children and how we are responsible for the future.

5. We the people demand justice in the courts for all plaintiffs and defendants. We demand to have a mix of races and genders on the jury. A fair trial is when the judge and jury try to understand both sides. We the people of color complain that more Black people and Hispanics are being prosecuted in the courts than whites. We demand that all punishments for breaking the law should be the same for all races and economic classes. We the darker people all through our lives stand up for what we believe in.

6. Our people have suffered through segregation, prejudice and racial profiling. We, the young Black freedom fighters demand that this should stop now. We need a new slate that involves all people coming together as one. We, the people of the Black community have the right to the same opportunities as all people, such as a great education and any job we’re eligible for. We deserve to live in a world without being judged or mistreated for how we look, how we wear our hair and clothes, or where we come from. Our people will fight for justice until everything is fair.

7. We the children represent our future. We are connected to the earth. We challenge the government to tell corporations to stop cutting down trees, polluting the air with gases from factories, polluting the water with oil and putting chemicals in food. We urge people to recycle and reuse. We recommend that people use buses, bikes and electric cars to save energy and reduce pollution on the earth. We the people need to stop global warming or the icebergs will melt and our earth will flood.

8. We the children demand that there be no more war. It is hurting us to see children and adults getting killed. We want no chemical weapons and bombs. Children should have the right to live safe from violence or hatred. We do not need to be introduced to violence as soon as we’re brought into the world. We the children have made a decision for less violence everywhere. One day children will come together for freedom from war. We deserve a better life than this.

9. We believe our whole world should be connected because we share the earth together. Everybody in the world should be equal and connected like next door neighbors. We recommend that all the countries should put their differences aside, and think about how they could make the world a world without violence, poverty, hunger, pollution and global warming. If everybody was working together our world would be a powerful planet of peace.